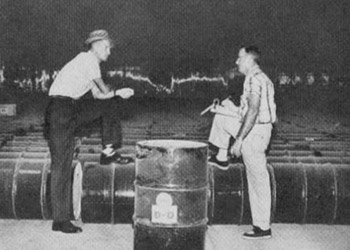 James Clarence (JC) Whitehurst, Jr., founded Coastal AgroBusiness, Inc. at age 24, out of his passion for farming and the opportunity to sell a single agricultural product – one of the first nematicides proven to be effective on tobacco. The company opened for business in October 1953 in Greenville, North Carolina, under the name Coastal Chemical Corporation. The business operated in the corner of Cannon’s Tobacco Warehouse for 11 years before building at the Evans Street location where our corporate offices were located for 53 years until 2017. During the 1950s and 1960s, Coastal added more products from multiple manufacturers to our product line, and began making and selling application sprayers.

Over the decades, as farming methods and technology advanced, Coastal embraced the ensuing opportunities. In the 1960s, two more office locations were added in North Carolina and Virginia. In the 1970s, Coastal began formulating products for worldwide manufacturers and added more office locations, including one in South Carolina. Coastal also began developing our own line of products designed to meet specific needs for our customers, including a tobacco sucker control which is still in Coastal’s product line today. 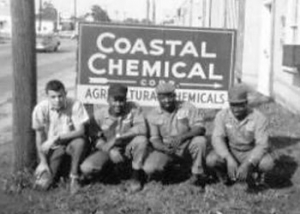 Coastal continued as a wholesaler, but as the industry became more vertically integrated, Coastal moved into the retail business in the 1980s. In the early 1990s, Coastal added fertilizer blending and seed to our product line. Throughout the 1990s and 2000s, Coastal opened twelve new locations across North Carolina, often by acquisitions. In the 2000s, Coastal added seed treatments and peanut buying to our offerings. And in 2012, Coastal completed our long-term expansion plan in Greenville, which began with the relocation of our retail trade to the Kinston plant in 2005 and concluded with the relocation of our parts and equipment shop and all production capabilities to our TCS facility on Carolina Leaf Road in Greenville.  In 2017, our Greenville corporate office on Evans Street relocated to Staton Road, which is in close proximity to our facilities on Carolina Leaf Road. 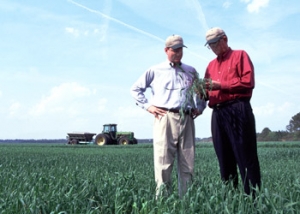 JC Whitehurst, Jr. served as president and CEO until 1997. His son, James Clarence (Jim) Whitehurst, III, who had been with Coastal for nine years, succeeded JC as president and CEO, and continues to lead the company today. JC served as board chairman until his death in April 2013, and was proud to see Coastal reach 60 successful years in business.

JC began Coastal with guiding principles that remain our core values today. He believed in treating customers, suppliers and employees with integrity, fairness and respect. He possessed a can-do attitude, and attracted and empowered talented employees who have that same philosophy. JC will be remembered for his visionary leadership and for building Coastal’s solid foundation that allows us to take on the exciting challenges of the future.