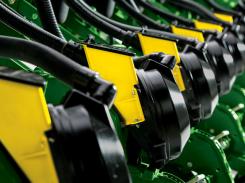 Engineers completely redesigned the seed delivery system to make the ExactEmerge system capable of placing seed in the trench at speeds almost twice as fast as recommended in the past. (Photo courtesy of John Deere)

LOUISVILLE, Ky. (DTN) — John Deere got the National Farm Machinery Show off to a fast start Wednesday when it announced a new corn and soybean planter that uses a revolutionary new seed delivery system with a recommended planting speed of 10 miles per hour.

Speedy, accurate planting is the Holy Grail for farmers with a lot of acres to plant in a short amount of time. The problem has always been that too much speed has meant too little accuracy; a tradeoff that can cost yield. Those days are over, says John Deere. Its new ExactEmerge planter with a revolutionary seed delivery system could double recommended planting speeds from 5 mph to a blazing 10 mph.

“We have broken the link between speed and precision,” said Elena Kaverina, product line manager.

Extensive research and development, and three seasons of planting in customer fields, got the ExactEmerge ready for prime time, Deere said. Along the way, its engineers had to start from the beginning and rethink how seed is delivered from hopper to seed trench. At the heart of Deere’s new planting system is a device it calls a brush belt, whose job is to replace the venerable seed tube when planting at high speeds.

Let’s start with the brush belt. Product Specialist Kelby Krueger says Deere engineers first began to question the essential role of traditional seed tubes after watching high-speed video of seeds falling into a seed trench at high planting speeds. They bounced and rolled and — in general — were out of control. That makes sense because once seeds leave the meter and slide into the tube, they have about 2 feet of free-fall. Throw in variations caused by side hills and bumpy terrain, and it’s little wonder that seeds are kind of on their own coming down the tube.

The solution, Deere engineers decided, was to eliminate the tube and develop a mechanism to firmly hold a seed in place all the way from meter to trench. The final design looks like the bar of a chainsaw encased in plastic, but instead of sharp teeth it has brush bristles attached to a belt. With Deere’s patented brush belt, a single seed is handed off from the meter and nestles firmly into the brush’s bristles, which are temporarily forced open. The bristles then spring closed as they capture the seed.

The belt carries the seed past a sensor, which counts it and sends data to a new SeedStar 3 HP in-cab monitor. When the seed reaches the bottom of the belt at ground level, the bristles open and is placed into the seed trench. The vertical drop is only as deep as the trench; say 2 inches… not much room for bouncing or rolling.

“The seed is controlled through the whole process, all the way to the ground and is not affected by dynamics,” Krueger said. “Sometimes

[when viewing high-speed images] the seeds coming off the brush belt seemed to just stand upright in the trench and then just fall over.”

Sounds simple, but the system is really complex. For instance, what mechanism turns the brush belt and how fast does it go? Engineers designed an electric motor system to turn the belt and they controlled its speed with sensors to match the planter’s ground speed. That leaves little relative motion between the seed and the ground, which minimizes bounce and roll.

Meanwhile, the meter up top has a separate electric motor to enable it to measure the correct seed populations into the brush belt. The higher the population, the less distance between seeds as they ride on the brush belt.

The ExactEmerge system is currently meant for corn and soybeans only.

For soybeans, singulation and placement accuracy was so great during system tests, Krueger said, growers might be able to lower seeding rates because nearly every seed was left in an ideal position to germinate.

While the new ExactEmerge system has changed a lot, it still relies on some standard Deere equipment, including its active down-force feature, which creates a consistent seed trench depth and its trench closing mechanisms to achieve proper seed to soil contact.

Gravity makes the seed tube a simple and reliable concept. The brush-belt system, by contrast, has a lot of moving parts. Growers might ask if they will face reliability issues with the ExactEmerge system.

“The challenges [of a planting system this complex] are one reason there is nothing on the market like this,” Krueger said. Deere understood that when it started the process. “When we were developing the project, we held our engineers to the standard of no more downtime than the previous systems.”

Extensive testing shows that the system will be reliable, despite the fact that there are more wear points in a brush belt than a seed tube. For instance, seed on the brush belt glides on a replaceable strip. But replacement should be only a three- to five-year occurrence, as with other components of the row unit, Krueger said. Sandy conditions and high-rate beans might shorten that timeframe.

To aid in maintenance, Krueger said, engineers designed the system to be easily accessible.

Electric motors are also unusual on planters. To power the two motors per row required on ExactEmerge system, Deere installed a variable load alternator driven by two hydraulic hoses coming from the tractor. These are the same hoses that work the variable rate drives on Deere’s current planters. The alternator uses 12 gpm of hydraulic flow to produce a 56-volt charge; the alternator load decreases when less electricity is needed.

Krueger doesn’t expect that farmers with the new system will go slowly: “When we gave customers this planter [to test], we thought it would take them a while to feel comfortable getting to 10 mph. That didn’t happen. They would plant, then get out and dig up seed in the ground. When they saw the results, they would go faster.”

The ExactEmerge system was officially introduced at the National Farm Machinery Show in Louisville, Ky. A limited production run this year will lead to field demonstrations in the spring and customer availability next year. Pricing is not yet available.

When released, the ExactEmerge system initially will be available for Deere’s 1775NT and 1795 planters in 15-, 20- and 30-inch row spacings. They will be for central fill units only.

Growers uninterested in 10 mph capabilities need not worry. Deere does not plan to phase out its traditional systems.

“Along with ExactEmerge, our premium feature, we will continue to offer seed tube configurations,” Kaverina said. “Growers may choose between the two systems based on their preferences and their farming operation needs.”