Mark down 2013 as the year that the center of high-yield corn production clearly moved south of the Midwest Corn Belt. A record five entries in the 2013 National Corn Growers Association’s (NCGA) National Corn Yield Contest exceeded 400 bushels. All were produced in Virginia, Texas or Georgia. 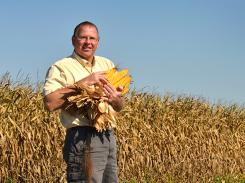 David Hula, a perennial contest winner from Charles City, Va., set a new overall world corn yield record with an entry of 454.9837 bushels to the acre. He broke the previous high-yield mark of 442 bushels set in 2002 by now-deceased Manchester, Iowa, corn grower Francis Childs, whose mark remains a record for nonirrigated corn.

David’s brother, Johnny Hula, produced the second-highest yield in the 2013 contest, with a yield of 421.2579 bushels. The Hulas’ entries ranked first and second in the contest’s no-till/strip-till irrigated class. There was one more Hula winner among the record 8,827 contest entries in 2013 yield contest. David’s son, Craig took first in the no-till/strip-till nonirrigated class with an entry of 332.7937 bushels. The biggest nonirrigated yield in 2013 came from Kevin Kalb, of Dubois, Ind. It was 374.6210 bushels per acre.

David Hula produced the record on a leased field owned by Curles Neck Farm, a dozen miles outside Richmond and 30 miles from the home Renwood Farms. It is old ground. Colonial records for the property, also known as Curles Neck Plantation, date back to 1635. The farm lays on a flat, mile-wide peninsula north of the James River. Hula’s 1,400 rented acres are sandwiched between a pair of sharp curls in the river ringed by low, swampy woodlands. Hula added irrigation to the farm three years ago. But he had not farmed Curles Neck as aggressively as he had his home farm — soils that in 2011 produced a previous, personal best 429 bushels per acre.

“We just didn’t know what that soil was capable of

[at Curles Neck],” Hula said. It was time to find out. In 2011, he began to apply the same practices at Curles Neck as he used on his home farm—matching genetics to the soil, keeping the plants healthy. That harvest revealed unknown potential.

Curles Neck’s virgin soils are similar to Hula’s home farm’s Pamunkey soils—fine, sandy loam at the surface with a yellowish-red clay underneath. During the winter of 2012-13, Hula soil-sampled the farm in 2 1/2-acre grids. The grid work shows more pH variability in the field than with traditional soil sampling. He also ran a Veris EC cart over the ground to produce soil maps of the rooting zone. Hula overlaid the EC readings with the grid samples and his yield maps to produce a refined map to variably apply potash and lime.

“To do that, you had to believe it had potential,” he said. Hula planted DuPont Pioneer’s 2088YHR treated with Biovante’s Pentilex (accelerates germination), Poncho 1250 + VOTiVO (early-season protection from black cutworm, wireworm and others) and zinc. Hula points to Biovante’s products as key applications in his never-till fields. They feed soil microbes and stimulate the soil, he said.

“We got a great [seed] drop,” he said. Even spacing and emergence are critical to high yields. Hula gleaned the technique from often-time corn contest winner Steven Albracht, of Hart, Texas. “The crop was coming up uniform, all of it within about eight hours.”

Then conditions changed. “When the corn was about 4 inches tall, we normally measure rain in inches, we were measuring rain in feet,” Hula recalls. “It was like a hurricane without the wind.”

But critically, the rain wasn’t as heavy at Curles Neck. It was cloudy. Hula’s end-season weather summary shows 60% cloud cover during the growing season—two to three times normal. The nights were cool. August was sunny and dry. “Maybe we had more sunlight at critical times than I thought,” he said.

One in-season decision helped Hula work with weather. To ensure timely crop applications, he prepositioned a sprayer at Curles Neck. Timing is key to Hula’s program.

“My goal was to keep the corn from going into dent,” he said. “In my mind, as long as the crop is healthy and green, it is continuing to pack energy into the ear.” This crop, he said, looked as green and healthy at 21% moisture as it did at 36%. At season’s end, he found dry, dent-free kernels.

Hula applies a starter fertilizer (60-30-0) with 6 pounds of sulfur, 0.6 pounds of zinc and 0.1 pounds of boron, 3 inches to the side of the seed trench and 2 inches below. He applies BioRed from Biovante (free-living soil microbes). He adds an in-furrow pop-up. He applies 3-18-18 through the planter at 2 gallons. The practice boosts yields as much as 11 bushels.

At V3 to V4, Hula applied Biovante’s Micro-8+ and its BioMate. “It’s just a critical” application, Hula said. “That’s when the plant is starting to photosynthesize, but there is not much of a root system.” Among Micro-8’s micronutrients are copper, iron and manganese. BioMate contains complex sugars to feed soil microorganisms. He applies BioMate with every spraying pass.

Closer to V6, Hula sidedresses 160 pounds of nitrogen and 20 pounds of sulfur, BioMate and Assist 45. Biovante’s Assist 45 aids in soil regeneration. Hula goes after weeds at V6 with Halex GT. At V6 and V12, Hula applies Priaxor for a wide range of fungal infections. He also applies BioMate and Micro-8+.

Hula is excited about fertigation, the application of nutrients through irrigation. It’s a practice he is learning from Randy Dowdy, a champion grower from Valdosta, Ga. Even with rain, Hula said the corn needed additional nutrients. He applies 30 pounds of N on an irrigation turn with BioMate and Micro-8+. Prior to tasseling and about five days apart, Hula makes two fertigation applications with 30 pounds of potash.

Hula hears criticism of his program for its cost. “Don’t just look at prices,” he cautions. “One should understand cost per bushel,” he said. “I’m trying to keep [the crop] balanced and not allow the plant to want. By spoon-feeding the crop, I show fiscal responsibility.”

In 2013, years of work came together at Hula’s Renwood Farms operation and Curles Neck Farm. “This accomplishment has been long in the making. I became a student of corn. But it was a cooperative effort. I work with a team — agronomists, other farmers. Realizing how we are stewards of this land gives me satisfaction.”