Sample for SCN Before Selecting Seed

Sample for SCN Before Selecting Seed

ST. LOUIS (DTN) — If a thief snuck in around harvest time and made off with 30% of your soybean crop, you’d probably notice, right? 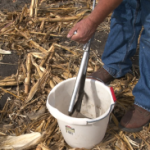 Sampling for soybean cyst nematodes after harvest can be time consuming and expensive, but yields lost to SCN might cost you more in the long run, according to Iowa State plant pathologist Greg Tylka. (DTN file photo by Nick Scalise)

The soybean cyst nematode (SCN), the tiny pest that infests soybean roots, is the number-one source of yield loss for soybean growers in the U.S. The presence of these tiny nematodes — a female stuffed with 200 eggs is the size of the period at the end of this sentence — can go undetected at low to moderate levels.

Post-harvest conditions make an excellent time to sample for SCN, plant pathologists have noted in recent weeks. Most importantly, knowing nematode levels could make a serious change on your 2015 soybean seed selection.

At current commodity prices, more growers this year are thinking of increasing soybean acreage in 2015. Even long-term continuous corn growers should test for SCN levels if they’re thinking of switching fields to beans. Tylka’s research has shown SCN eggs can survive without soybean roots for up to 10 years.

Soybean cyst nematodes are increasingly prevalent in the Midwest. In Illinois, an estimated 80% of fields have SCN; in Iowa, that number hovers around 74%, Tylka noted. Yet many farmers deceived by healthy looking plants and decent yields have yet to test for the pest in their fields.

“If you’re unhappy with your soybean yields and you don’t know why, that almost is an indirect symptom of soybean cyst nematode,” Tylka said.

Other risk factors for SCN include living in a state or region where the pest is known to exist, or having soil with ph levels of 7.6 or higher, which the nematodes thrive in, Tylka said.

Research also suggests that nematodes can do more damage when they infest plants also afflicted by sudden death syndrome and soybean aphids, he said.

TO SAMPLE OR NOT TO SAMPLE

Sampling for the pest can be time consuming and expensive, Tylka said. The nematode’s tiny size makes it easy to miss in soil cores, particularly if your levels are low. Plant pathologists recommend pulling 20 soil samples for every 20-acre field area where you plan soybeans. Analysis costs $20 to $30 per sample, depending on the lab, Tylka said.

Across thousands of acres, a 5-bushel-per-acre-loss, which nematodes can steal “in a heartbeat” from a susceptible variety, adds up pretty quickly, Tylka said.

If you skip sampling, and farm in an area where nematodes are present, you can hedge your bets by planting a nematode-resistant soybean variety. Knowing actual infestation levels, Tylka said, would allow you to correctly prioritize other disease packages in seed, such as resistance to Sudden Death Syndrome.

For details on how and where to sample, see Tylka’s Iowa State Integrated Crop Management article on sampling for SCN here: http://goo.gl/….

If soil samples reveal even a very low level of nematodes, act aggressively, Tylka warned. Nematodes are a prolific pest, and the numbers are likely to increase exponentially each year if not controlled.

The vast majority of SCN-resistant varieties still use a single source of resistance, called PI88788, Tylka noted. Nonetheless, he still recommends rotating different soybean varieties each year. “Not all varieties are the same,” he explained. “The

[SCN] resistance involves four or five different genes and not every variety gets all of the genes, so some are more resistant than others. There’s some evidence to show that if you use different varieties in different years, that helps a little bit.”

Growers with extremely high concentrations of SCN should consider not growing soybeans at all for a while, Tylka warned. Crop rotation will not eliminate the nematodes, but it can lower densities.

Companies such as Syngenta, Bayer CropSciences and Plant Health Care have seed treatments available for SCN, and Michigan State University tested some of them last year. You can see the university’s evaluation here: http://goo.gl/….

The study evaluated Berseem clover, cowpea, crimson clover, three types of red clover, sweet clover, two types of white clover, Austrian winter peas and field peas. The results showed almost no SCN-reproduction on any of the plants’ roots, which means cover crops are unlikely to serve as hosts for SCN, Tylka concluded. Whether or not cover crops can actually serve to suppress SCN reproduction is still unknown, he added.

You can read about the study and the possibility of using cover crops to suppress SCN here: http://goo.gl/….

Emily Unglesbee can be reached at emily.unglesbee@dtn.com